Home > Removals Man with a Van in Sunbury-On-Thames

Removals Man with a Van in Sunbury-On-Thames

Our professional team of movers and packers from Removals Man with a Van in Sunbury-On-Thames in will take care of protecting and transporting your household goods.


SPECIAL OFFER
5%
FOR ALL REMOVALS
Get instant quote for Removals Man with a Van service now!
020 3000 7843
About Sunbury-On-Thames 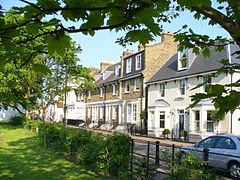 Sunbury-on-Thames, also known as Sunbury, is a town and suburb of London in the Surrey borough of Spelthorne (historically Middlesex), England. Sunbury lies just outside the borders of Greater London and is approximately 13 miles from Charing Cross. The town has a railway station and is situated at the beginning of the M3 motorway. Lower Sunbury contains most of the town's parks, clubs and allotments and is home to Kempton Park Racecourse, served by its own railway station. A large retail centre is at Sunbury Cross, otherwise shopping and pubs are dispersed. By Sunbury Park is a public walled garden which has a large millennium tapestry in its art gallery/cafÃ©. Most of Sunbury's riverside is privately owned, including Wheatley's Ait and Sunbury Court Island.