Home > Removals Man with a Van in Hammersmith

Removals Man with a Van in Hammersmith

Our professional team of movers and packers from Removals Man with a Van in Hammersmith in will take care of protecting and transporting your household goods.


SPECIAL OFFER
5%
FOR ALL REMOVALS
Get instant quote for Removals Man with a Van service now!
020 3000 7843
About Hammersmith 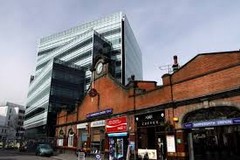 Hammersmith is a district in west London, England, located in the London Borough of Hammersmith and Fulham. It is bordered by Shepherds Bush to the north, Kensington to the east, Chiswick to the west, and Fulham to the south, with which it forms part of the north bank of the River Thames. It is linked by Hammersmith Bridge to Barnes in the southwest. The area is one of west London's key commercial and employment centres, and has for some decades been the main centre of London's Polish minority.It is a major transport hub for west London, with two London Underground stations and a bus station at Hammersmith Broadway.