Home > Removals Man with a Van in Stanmore

Removals Man with a Van in Stanmore

Our professional team of movers and packers from Removals Man with a Van in Stanmore in will take care of protecting and transporting your household goods.


SPECIAL OFFER
5%
FOR ALL REMOVALS
Get instant quote for Removals Man with a Van service now!
020 3000 7843
About Stanmore 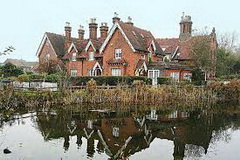 Stanmore is a suburban residential district of northwest London in the London Borough of Harrow. It is centred 11 miles (18 km) northwest of Charing Cross. The area, based on the ancient parish of Great Stanmore includes southern slopes of the unnamed ridge of hills rising to Stanmore Hill, one of the highest points of London, 152 metres (499 ft) high.
The area was recorded in the Domesday Book as Stanmere, the name deriving from the Old English stan, 'stony' and mere, 'a pool'. There are outcrops of gravel on the clay soil here and the mere may have been one of the ponds which still exist. By 1574 the area had become known as Great Stanmore to distinguish it from Little Stanmore.