Home > Removals Man with a Van in Oakwood

Removals Man with a Van in Oakwood

Our professional team of movers and packers from Removals Man with a Van in Oakwood in will take care of protecting and transporting your household goods.


SPECIAL OFFER
5%
FOR ALL REMOVALS
Get instant quote for Removals Man with a Van service now!
020 3000 7843
About Oakwood 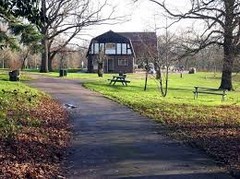 The area derives its name from Oakwood Park, which Southgate Council purchased in 1927 and opened to the public. Oakwood Park was named after Oak Lodge, which stood in the grounds between the late 19th century and First World War. There is an avenue of oak trees to the north of the park, which until recently was added to annually by the Mayor.

The arrival in Oakwood of the Piccadilly line extension of the London Underground in 1933 heralded the start of a spectacular building boom. Builders George Reed and Laing bought up much of the land for development and estates began to eat up the countryside along Bramley Road and towards Cockfosters.

Following the war a number of shops were opened around the Underground station, and today Oakwood has many shops, restaurants and services.